for the past couple of years, i've been developing my randonneuring chops on a 'vintage' turn of the century Serotta Colorado III w/campy daytona. It's been a wonderful bike. But..no eyelets, and geometry not intended for bags and excess weight. I've done the other bikes too; cyclocross, touring, even a moulton, for pete's sake. All bikes people like to say work. All compromises. With all the bikes I own and enjoy, I really wanted a brevet bike. made to rando! So, I decided to get it done. Chuck extinguished his torch, so no Coho. Boutique was too much $$ and too much time. I really wanted American, and the list quickly narrowed to just a few choices. Also, as much as I enjoy the view and the ride, I wanted sporty too. Rene Herse is a legend in french randonneuring. Frames start north of four grand..Mike Kone, herse expert and the US agent for their products knows not everyone can afford those stunning bikes, so, he designed one we can: the Boulder Bicycles Randonneur!

The frame is avail. in 700c or 650b versions, I went with 700. What grabbed my attention was this-"The reality is that many bicycle producers equate randonneur riding with "take your time and smell the flowers."  We love that attitude - but it isn't for everyone.  Some randonneurs are very concerned with speed as well;  for those riders, compromises in design that detract from the performance of the bicycle are unacceptable.  Boulder Bicycle makes bicycles that are a tool for the performance oriented randonneur and a treat for those more casually minded." I knew I'd met my match when I read that. a series of emails commenced and when he put a special up on his blog, I made the deposit. Let me say that the whole deal with boulder was pleasant and easy going. Mike is friendly and really knows his stuff. while I knew what I wanted, he offered solid advice and gently persuaded me on a couple items that turned out to be the right choices..so, without further ado, here's how it all worked out...


If one looks at Boulders' kit offerings they will find some of the stuff I used, and I got those parts from Mike. He offers good deals to those getting a bike from his shop. If ya know me, a road bike of mine will have Campy. So I scoured ebay for record and chorus 10sp. ders and brifters. I found the record headset in sweden. the white time pedals aren't avail here, so they came from england. I had planned on a nitto cockpit, post and rack all along and that stuff came from boulder, along with the killer sugino 'mighty tour' crank, SKF german BB, both hubs, edelux headlight, and the challenge tires. I called peter white for the cages, and neat little spaninga 'pixeo' taillight. Rivendell had the nitto barend plugs. Velo Orange for the hammered fenders and 'Grand Cru' canti brakes. Wallingford Bike had the Electric blue B17.

Mike sent the hubs, a white industries H3 hi-low Ti cassette, and schmidt's new SON Delux, along with spokes, so I could lace 'em up to mavic open pros' beforehand. both are laced 3X-the front with wheelsmith XL's, and the rear with XL on the non-drive and 14/15 db's on the drive. they both rock! the new dynohub, with almost no drag and less weight, is really cool. it's only meant to run LED lights, but can spin either way. nice for wire routing flexibility..

the bike came on a monday, and I hoped to ride it by the weekend. ha. with so many complications and steps, I planned out the week and got after it. the steer tube was a mile long, so I installed the headset, did some figuring, put spacers on it, and pondered the cut. I installed the BB and crank, and both derailleurs. I decided it would be better to get the tube cut (by a pro), so I put the fork in my moultons' bag and rode to Matt's shop and had him do it. easy breezy. I made the stack, put on the nitto stem and noodle bar, and chorus brifters. 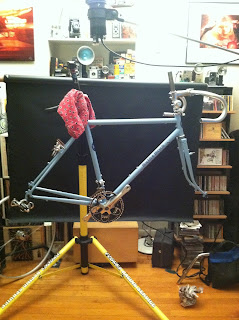 from here it looked like mount the brakes, run cable, and then onto the tedious detail work.
simple! yeah, look at these brakes, for starters. mega adjustable! cantis' are always fun. meh. 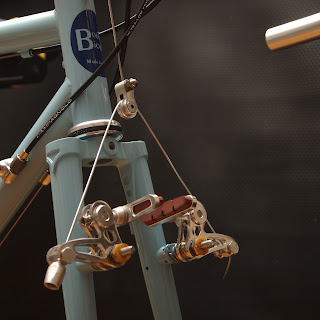 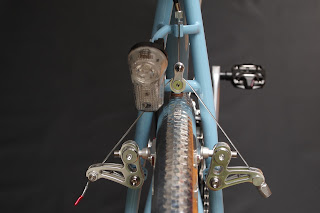 the cool little straddle hangers are already gone. I replaced them with Paul Moon Units.
the paul's are wider and more trustworthy. the front hanger slipped on the first ride. they also give better clearance by the pad bolt. otherwise I like the brakes. next came the front rack, a nitto M12, and the velo orange fenders. i put the edelux headlight on too.. 3 hours and a few expletives later I was done with that, and isn't it lovely? :o) 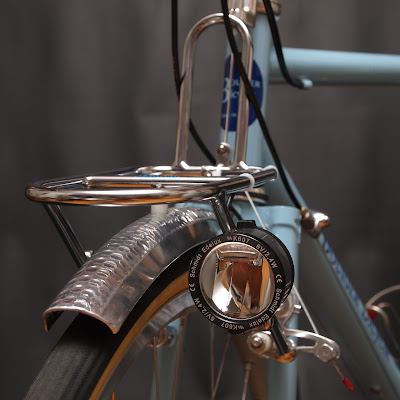 note there are no 'L' brackets on the fenders. the front is suspended from the rack and under the fork crown with a daruma bolt. the rear is drilled and bolted to the two bridges on the stays. super clean and rock solid too. leather washers keep things quiet. at 2 in the morning it's really quiet, but I took it down the street and back just because I had to! even with ice-cold unwrapped bars I knew it was going to be good. relieved and tired I called it a night.
of course it had to pour rain all day sunday, so I stayed in and made photographs.. 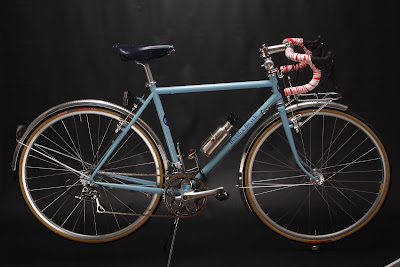 the bike's made for lighting, note this cool detail on the back: a small braze-on on the left stay, and a neat little arm off the brake cable bridge. as soon as the new turbo superflash comes out, it will hang there. I put a tall cateye on the lower braze-on.. 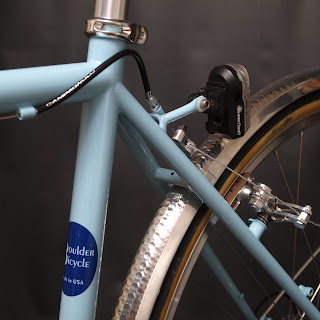 with the superflash under the rear bag i'll avoid the dreaded water problems. i'll have a spare in the bag and it can go the bag giving me plenty of redundancy/back-up! 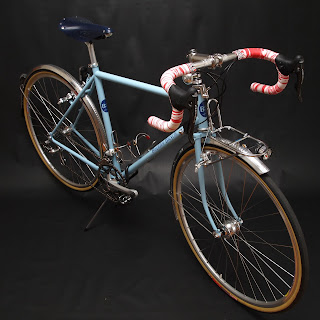 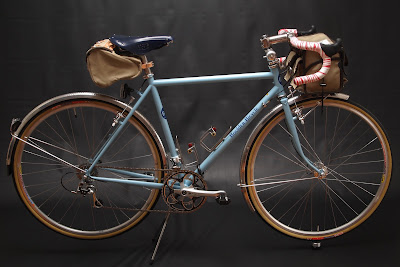 so I finally got out on it the next day with Hoff, 'the fast Bryan' ;)  good times.. 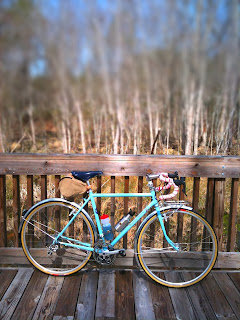 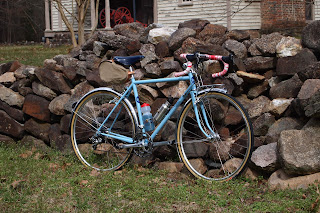 first impressions were: relief! joy! holy cow, it rides sharp. responsive and light. secure.
comfortable. Hoff shot video, and I had set the saddle a tick low. up a couple mils and viola!
I really love it. I think another part of the great ride is those incredibly supple challenge parigi-roubaix tires-700x28, like big, puffy tubulars. climbs nice, but we'll see on 4/23 on Tony's hot springs 200k, if the 13-26 cassette is enough. by the way, with the rear bag (empty) the weight is 25 lbs. the TIG'd True Temper OX platinum frame is light at about 4 lbs.
if you read all this, you're a bike geek too. you understand what a labor of love this bike was/is to me. I put more time into this build than any I have done  before..I plan on riding the bejezus out of it too. see ya on the road!
Posted by geof at 2:42 AM

Doctor on a bike said...

Wow. And I hadn't noticed those wire guides for the Son on the front fork before. Really ingenious solution.

Yep, I'm a bike geek too! Thanks for a great post G, and congrats on a lovely ride.

Awesome Bike, looking at getting one myself... Rico from The Paceline Forum pointed me to your blog... any further insights about the Boulder you can give after having it for a while? BTW- I'm looking at the 650b version, any particular reason you went with 700c?

Hi, Where did you get the bracket for the front light? 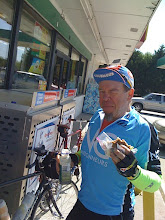